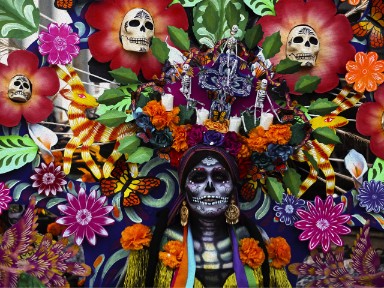 The Day of the Dead, declared by UNESCO as an intangible Heritage of Humanity, is a traditional Mexican celebration which takes place every year on November 2nd.

The festivity, a result of the syncretism between pre-Hispanic and Western beliefs, celebrates the transitory return to Earth of deceased relatives and loved ones. More recently, new traditions have developed around the Day of the Dead. One of them is parades which are held every year across the world to celebrate this festivity (see OBA Agenda, 5th of November).

Carlos Fuentes will feature on the Altar de los Muertos
Carlos Fuentes Macias was born in 1928 in Panama, his father being a Mexican diplomat, and died in 2012 at the age of 83 years old in Mexico City. This year 2022 marks the tenth anniversary of his death. Fuentes was one of Mexico's most prominent writers. Until the day of his death he was considered as a candidate for the Nobel Prize for Literature because of his involvement in the public and literary criticism sectors. Some of his most popular publications include The Death of Artemio Cruz, Terra Nostra, and The Old Gringo. In addition to his career as a writer, he also became a diplomat. He was the Mexican Ambassador to France from 1975 to 1978.

On the digital screen in the hall there will also be photo’s on Día de Muertos by Mauricio Silerio, Mexican photographer.